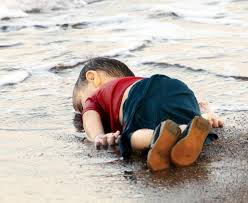 Aylan. He was 3 years old, from war-torn Syria

The migrant march out of Syria is but a symbol of the slow and steady disintegration of the greater Middle East and certain States within the African continent.  This disintegration and ensuing mass migration has highlighted the inability of the West (EU & US) in collaboration with their Gulf State allies to convene, collaborate and develop solutions to the steady breakdown of governments in the region.  There is simply no excuse.  The EU & US should be embarrassed at their incompetence and the length of time it has taken for governments to act.

With 4 million Syrians on the march and hundred’s of thousands fleeing from other parts of the Middle East and Africa, the West must act swiftly and with moral clarity.  Our collective efforts should go beyond housing and access to the necessities for human existence.  They must include robust diplomatic efforts to bring peace and stability to the Middle East.  Our end goal is not resettlement but the fundamental right for individuals and families to return home.  With people literally walking country to country we find ourselves at a tipping point.  Governments and citizens alike must do something significant to help ease the pain and suffering of those wandering, all of whom carry within them the unique dignity of the human person.  This dignity demands action.

Pope Francis admonishes the Catholic Church throughout Europe to open its doors to the migrants.

call to act upon its principles.  On Sunday he called the Catholic Church, including  “every parish, religious community, monastery and sanctuary in Europe to shelter refugees fleeing ‘death from war and hunger,’ adding that the Vatican’s two parishes would lead the way by taking in two families”  As I read the Pope’s statement, I immediately thought of two stories within Scripture, the Good Samaritan (Luke 10:25-37) and The Judgement of the Nations (Mt. 25:31-46), both of which inspire me to action.  Here are the lessons I derive from these stories and how they apply to the Pope’s call to action on the migrant crisis.

This story implies that knowing and doing what is needed in times of crisis emanates from the heart of the individual.  Doing what is right does not happen because of certain knowledge, position or privilege in life.  If this were the case the priest and Levite were perfectly situated to step in and rescue the individual who was beaten and robbed.  However, when the priest saw what had happened – he moved on.  When the Levite came in a little closer and examined the situation, he immediately backed away and moved on.  However, when the Samaritan, the one labeled in society as a religious “schismatic” or outcast, saw what happened to the innocent he acted, binding the wounds and making provision for the individual to make a full recovery.  This story should compel us as individuals, that in the face of certain evil, we ought to respond to that inclination within the heart to help.  We should not succumb to the voices of doubt, discouragement and delay and in so doing turn away from those in need.

The Judgement of the Nations:

There is a message within this passage that I believe is one of the most important proclamations within the Gospels.  It is summed up in verse 40, “And the King will answer them, ‘Truly, I say to you, as you did it to one of the least of these my brethren, you did it to me.'”  Christ connects the action of the Christian life directly to him.  As we act to care for the needs of the individual in a mystical way we are literally touching the heart / person of Jesus Christ.  In making this statement He reveals something about God’s character and nature.  It is within the very nature of God to be connected to His creation in a very unique way.  So much so that as we care for those in need we are doing so to Christ himself, a statement St. Teresa of Calcutta used to say all the time when speaking of her motivation in caring for the untouchables in Calcutta and beyond.

I don’t know what you have the capacity to do in relation to the exodus of the innocent from the Middle East and beyond as certain regions descend into chaos.  I do know that when the exodus of a person’s homeland is better than being at home, that situation demands the attention of the global community.  Therefore, all of us should be inspired to work at whatever capacity Christ has granted for the sake of the suffering innocents.

May God grant us clarity, wisdom and fortitude to do what is right.

2 thoughts on “Syria, Migrants & the Perfection of Pope Francis”