A world in turmoil: 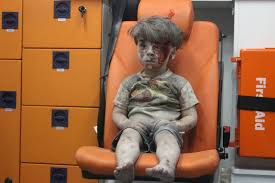 This picture of an innocent child as another casualty of the civil war in Syria shook me, went viral and once again is drawing attention to the wars raging in the Middle East.

This picture also serves as an additional episode in an unfolding story on the world stage.  The civil unrest in the Middle East, the displacement of millions from their homeland, and the inability of world leaders to find diplomatic solutions to the problems that directly impact the dignity of the human person.

Why are we distracted?

The facts as I see them are reflected in the headlines on the major American news media websites.  We are more interested in Ryan Lochte’s lies, Hillary blaming Powell, Trumps campaign shakeup and the latest rules on politically / culturally correct speech on the university campus.  Literally, these were the four leading stories just days ago!

In the middle of all this a friend of mine from the U.K. posted this on Facebook in reaction to the Syrian conflict.  I read this statement and it shook me, it made me think about (my) priorities and gave me perspective (on what is truly important). Reflecting on the human toll of war he made this statement:

What element of human solidarity exists when we continue to allow wanton, government led, taxpayer underwritten murder across Syria and seek to divert our gaze and distract human conscience with the minutiae of Brexit, potential pension black holes and Olympic successes?

For all our inherited wisdom we remain incapable of respecting and valuing human life as the core currency of any healthy and viable human society. I have no answers, only irrelevant tears. How can we remain so impotent?

This statement challenged me refocus my gaze and not get distracted by the curated news, the culture of consumption and the tendency to be self-absorbed.

This statement reminded me about what the Church teaches regarding the human person,

community and the importance of human solidarity.  The last time I checked the Scripture was clear in Genesis 1:26-31 ESV,

Then God said, “Let us make MAN in our image, after our likeness. And let them have dominion over the fish of the sea and over the birds of the heavens and over the livestock and over all the earth and over every creeping thing that creeps on the earth.” So God created man in his own image, in the image of GOD he created him; MALE and FEMALE he created them. And God blessed them.

And God said to them, “Be fruitful and multiply and fill the earth and subdue it, and have dominion over the fish of the sea and over the birds of the heavens and over every living thing that moves on the earth.” And God said, “Behold, I have given you every plant yielding seed that is on the face of all the earth, and every tree with seed in its fruit. You shall have them for food. And to every beast of the earth and to every bird of the heavens and to everything that creeps on the earth, everything that has the breath of life, I have given every green plant for food.” And it was so.

And God saw everything that he had made, and behold, it was very good. And there was evening and there was morning, the sixth day.

God created the human community as a reflection of the of the Trinity and the love that exists between the Father, Son and Holy Spirit.  It is out of this example of pure love that human solidarity exists.  We are uniquely connected to one another and called to reflect Trinitarian love.  This love is our foundation for peace.  We are called, all in our own unique way, to work tirelessly for peace, an end of all (unnecessary) war, and to call for the creation of environments where individuals and families can exist and thrive.  This means access to – but not limited to:

The Catechism of the Catholic Church tell’s us this about the dignity of the human person and how it is to be respected and lived out:

1700 The dignity of the human person is rooted in his creation in the image and likeness of God (article 1); it is fulfilled in his vocation to divine beatitude (article 2). It is essential to a human being freely to direct himself to this fulfillment (article 3). By his deliberate actions (article 4), the human person does, or does not, conform to the good promised by God and attested by moral conscience (article 5). Human beings make their own contribution to their interior growth; they make their whole sentient and spiritual lives into means of this growth (article 6). With the help of grace they grow in virtue (article 7), avoid sin, and if they sin they entrust themselves as did the prodigal son1 to the mercy of our Father in heaven (article 8). In this way they attain to the perfection of charity.

The unique dignity of the human person cannot be abridged and must be protected.  In addition, we cannot wait for violations of this dignity specifically and of human communities in general to arrive on our front door before we actively work to support, protect and defend it.

Now some may ask, “What can I do to fight for what is right in relation to upholding the idea of human dignity and solidarity?”

Finally, remember what is important.  All of us reading this have responsibilities. Those responsibilities, however important, do not excuse us from responsibility to the wider human community in our country and in countries around the world.  It is our belief, our faith in God that binds us one to another.

But he, desiring to justify himself, said to Jesus, “And who is my neighbor?” Jesus replied, “A man was going down from Jerusalem to Jericho, and he fell among robbers, who stripped him and beat him and departed, leaving him half dead. Now by chance a priest was going down that road, and when he saw him he passed by on the other side. So likewise a Levite, when he came to the place and saw him, passed by on the other side. But a Samaritan, as he journeyed, came to where he was, and when he saw him, he had compassion. He went to him and bound up his wounds, pouring on oil and wine. Then he set him on his own animal and brought him to an inn and took care of him. And the next day he took out two denarii and gave them to the innkeeper, saying, ‘Take care of him, and whatever more you spend, I will repay you when I come back.’ Which of these three, do you think, proved to be a neighbor to the man who fell among the robbers?” He said, “The one who showed him mercy.” And Jesus said to him, “You go, and do likewise.”

St. Teresa of Calcutta »
« Catholic and Concerned: Politics in 2016