“Our Pope” – A converts perspective…

Throughout my career as a protestant pastor I followed, with interest, the life and ministry Pope John Paul II and Mother Teresa of Calcutta.  While on a short-term mission trip to Rome, Italy – I stopped by St. Peter’s to pray for Pope JPII.  In addition,  I used the documentary of Mother Teresa’s life as a tool to train short-term missionaries on the meaning of selfless service.  At the end of Pope JPII’s life I followed the funeral proceedings, conclave and the election of Pope Benedict XVI with great interest.  To this day I am not sure why I was so interested except to imagine that my process of conversion was already developing.

I cannot underestimate the impact Pope JPII and M. Teresa had on my life.  However, I do want to emphasize the idea that Pope BXVI is the only Pope I have every really known – as a Catholic.  For this I am truly grateful.  Pope BXVI has been fun to watch.  Because of my relative youth as a Catholic convert, I haven’t watched Pope BXVI through the lens of past political fights, the challenges of implementing Vatican II & its aftermath, other scandals or intrigue that the media loves to speculate on.  Not that I am ignorant of the history of the Catholic Church, its sin, scandal and the many challenges this institution has faced over the past 2000 years.  Yet, in my newness I have come to appreciate this particular Pope, having a Pope and all the benefits this office brings to the Catholic faithful.

Immediately upon our conversion, Heather (my wife) and I appreciated several things about the Papacy – one of them being the idea that in it we have a Shepherd that is charged with carefully watching over the spiritual needs of the sheep.  As I reflect on John 21:15-19, Pope BXVI has done a masterful job at feeding the sheep.  Between his first encyclical Deus Caritas Est (God is Love – John 4:16) and his now famous trilogy on Jesus of Nazareth this Pope has brought the Church back into an embrace of Christ or its natural Christological center.  As a convert from Protestantism, this has been music to my ears.  In addition to this, Pope BXVI has called the Church into the Year of Faith (a time of personal & corporate renewal) and encouraged us to fully embrace the New Evangelization (beginning with P. Paul VI, JPII & continuing with PBXVI).  If that were not enough (& I only scratched the surface) he has also carried on a dialogue with the Eastern Orthodox, opened up the doors for our Anglican brothers / sisters to join the Catholic Church and has spoken eloquently on the challenges the Church faces in a post-Christian society.  In addition, this Pope has embraced social media (@Pontifex – Twitter) and has challenged a new generation to the two-fold task of embracing technology for the sake of the gospel while centering oneself through the discipline of contemplation.  A wise bit of advise in a speed obsessed culture. 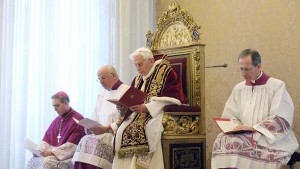 Abdicating the Office of Bishop of Rome – Successor of St. Peter.

Finally I want to talk about the way PBXVI decided to abdicate or retire.  Having made this decision, he leaves the seat of supreme influence as head of the Universal Church during the season of Lent.  Just as Jesus was baptized and went into the desert alone, to be tempted and to overcome, so too does Our Pope follow in the footsteps of Jesus.  By retiring now, Pope BXVI walks into the desert alone so that we may emerge from our Lenten sojourn celebrating Easter with a new Pope – a Shepherd that will lead us deep into this springtime of the Church.  This springtime is the fruit of the New Evangelization, Year of Faith, and a renaissance of tradition that represents the deep roots of the Catholic faith.

May God Bless His Holiness, Pope Benedict XVI, his successor, the Catholic faithful and the whole of the Christian community.